Nightmare Cinema Review – One Hell of an Anthology Grimmfest 2018

Woven together through the use of an abandoned cinema we are treated to five stories of horror, all covering different sub-genres and themes. Nightmare cinema is a fun and balanced anthology film that really offers a little something for everyone with directors including; Mick Garris, David Slade, Ryûhei Kitamura, Alejandro Brugués and Joe Dante.

We are guided through these tales by The Projectionist (Mickey Rourke) who eerily leads unsuspecting cinema goers through their worst nightmares. As our guide and our narrator The Projectionist is delightfully sadistic in the pleasure he takes from his ‘victims’ fear. He gives us permission to revel in their suffering and invites us to enjoy it with him.

So get comfy, gather your refreshments and turn your phone’s to silent for our main feature review.

The Thing in the Woods (dir. Alejandro Brugués) 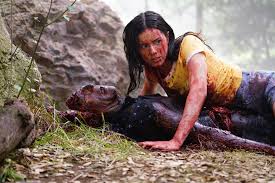 We begin with a typical ‘Cabin in the Woods’ 80’s style slasher. Brugués starts at the end with this one, rightly assuming that most of the audience for this film knows exactly how the previous two acts have played out. Our young and beautiful Final Girl and her love interest  are fighting off a monster dressed in overalls and a welding mask. It has a tongue in cheek humour style with every trope being utilised at the beginning of this segment as The Welder hunts down and burns his victims from the inside.

We think we know everything about this subgenre of horror but the reveal of who The Welder is turns all those clichés around and offers us something just a little bit different. It’s campy, gory and just plain fun! A call back to the slasher films we all know and love, but with a CGI twist. I won’t spoil this one as the fun lies in the reveal. It’s meta, it’s funny and it’s fast paced with twists and turns scurrying around every corner.

The Thing in the Woods starts off Nightmare Cinema with a cheeky genre nod and a fucktonne of splatter. The bar has been set, and it has been set high!

A loving couple enjoy a meal together as they discuss the upcoming milestone of meeting the boyfriend’s mother. Anna has a scar on her face from a house fire when she was young and we instantly get a feel for the heavy weight of insecurity she has for something we can see as being very small. In a display of ‘love’ her boyfriend offers to make her problem go away. He knows an amazing plastic surgeon who has worked on his mum and can definitely help make Anna just as perfect as Mother Dearest is.

As Anna goes under the knife and is kept from viewing the outcome we follow her paranoid journey around a disturbing clinic with a dark secret. We hear her boyfriend, a modern day Norman fucking Bates, is insistent that they can make his girlfriend even more perfect for him. Seriously, he’s a giant douche basket!

This segment has a hint of Twilight Zone about it, but it doesn’t fully commit to it. The concept is good but the payoff is dragged out for too long. The performance of The Surgeon is however manic and eccentric enough to keep you going to the end. 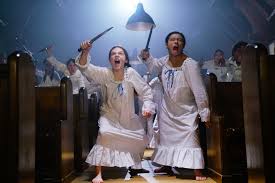 So what would happen if the film Machete and The Conjuring universe were put in a blender and seasoned pinch b-movie magic? You’d get the potent cocktail that is Mashit.

We open with a young boy in his Catholic School uniform as he tight ropes along the roof of the church with no will of his own. As Sister Patricia reaches for the poor compelled boy, their fingers almost brushing, his hand is snapped and he is flung from the roof in a sickening splat and explosion of blood. From there the tone is set and that tone is bloody!

Don’t get me wrong, I’m not criticising this, I bloody love me some good gore! I definitely chuckled my way through scenes of Father Abuelo creatively slicing, impaling and beheading the possessed, it was a hoot. Just don’t expect much more from this film. There are a few moments of possession horror, little girls with their jaws unhooked like snakes, crucifixes spinning themselves upside down and some screeching and screaming demon noises. Mostly we just watch a Nun and a Priest get down and dirty…and I do mean that in both of it’s ways. Bad bad man.

This was hands down my favourite segment of the film. I cannot tell you exactly what it meant or what the hell it was about, but God damn did it stick strong with me!

This beautiful black and white segment is all about the visuals and the feeling of unease that is perpetuated throughout it. Helen has been waiting for her appointment with the psychologist for a very long time and she, along with her two little boys, are becoming slightly impatient. Everything is beautifully clean, perfectly placed and delicately designed in the beginning. As we follow Helen through her interactions with the receptionist there is a clear shift in imagery, dirt begins to fall like ash, littering everything in the world around her and littering the air she is breathing. Faces warp and deform, strangely becoming more beautiful for just a few seconds before warping over in to pure terror images.

Her husband has left her, her children go missing and she has begun to come apart at the scenes. Is she hallucinating? Has the world around her warped and melted in to something horrific? Or have her internal struggles manifested themselves in to this monochromatic nightmare?

This Way to Egress is reminiscent of an episode of Black Mirror with both the stunning visuals and the type of narrative that keeps you tense, edgy and questioning everything that you see. This is truly a beautiful story within this collection.

Young Riley is a talented piano player with loving parents…at least for the first few minutes of this segment. While leaving his recital a crazed gunman attacks and kills Riley’s parents right before his eyes. He runs for his life but is caught in the chest with a bullet and goes down hard. He manages to avoid death and awakens with some intense scars and a new ‘gift’, he can see the dead. It all sounds very Sixth Sense, but the threat here is not the dead, it’s the living.

As Riley is being hunted through the hospital by the Manson style killer, who does not want to be identified, he also has to deal with his own loss and grief. He is surrounded by the dead but it is one familiar ghost that truly haunts him. Mummy wants her boy back.

This is a very different segment to the others, it play with emotions and the pain of a young child having lost his protectors. It’s a nicely done segment but it’s slower pace and slightly milder content means that it doesn’t necessarily spark at the end of the movie and is more of a fizzle.

Horror anthology is a beautiful thing, go for one film but be gifted with five! Nightmare Cinema manages to bring different styles and quirks together with a well structured wraparound and nicely paced order. You may not love every segment in this buffet but there’s definitely one dish that you’ll go back to time and time again.

I managed to catch this film at the brilliant Grimmfest 2018 festival and I’m looking forward to being able to watch it again. A release is planned for 2019 so keep an eye out for this!

Thanks for reading! Let me know what you think! Which nightmare was your favourite? Chec out some of my other Grimmfest reviews including Await Further Instructions.

We’re All Going to the World’s Fair [Grimmfest Review]: Welcome to the Internet